The answers to "how did you do that?". ALL IMAGES ON THIS WEBPAGE ARE COPYRIGHTED ©JOYCE MARIE MARTIN 2012 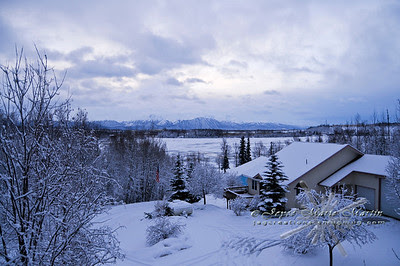 The above is the original untouched image. Using PSP X2 I used the adjustment levels tool to bump the contrast, then the clarifying tool to bump it even further and bring out the details. See image below... 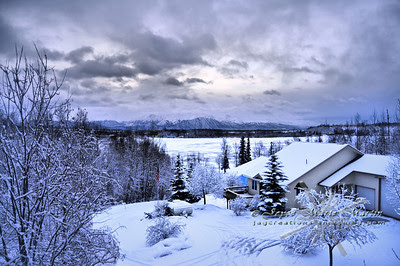 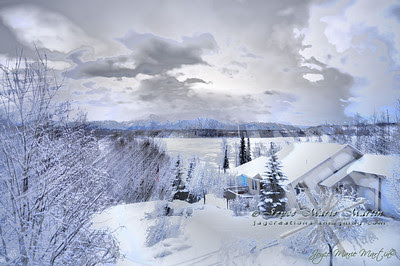 Nexts I copied a pasted the original image as a new layer. On layer one I ran a VM (viseman) Natural filter called lightsplash. This gave the image of the rays you see in the above image. On layer two, I ran a VM Extravaganza filter called Arora detector, which gave a metalic silver and blue hue to the image. I then faded the top layer to blend the images and merged them together to get the above image. I copied and pasted this image as a new image. 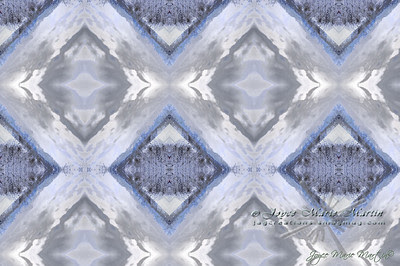 Then back to the original image (that has the exif after modifying), I ran a VM Toolbox Tiler filter and played with the settings to get the above picture. Next I went to the new copied image and copied it and then back to the original, I pasted it as a new layer. I resized it to be very small and faded it enough to see the diamond pattern behind it. After placing it where I wanted, I used the eraser tool and removed all the unwanted image to make a small diamond image. I then copied and pasted it as a new layer for each of the diamonds. I left the each layer slightly faded in order to make it seem like you were looking though either a window pane or ice. I merged all layers and the below image is the result. 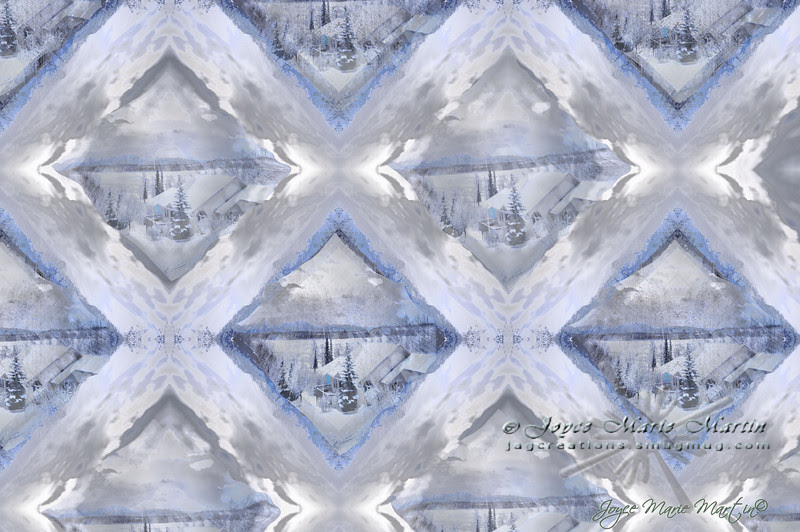 It seems that the horizons are off but really what you are seeing is an optical illusion created by the distant horizon going away from the camera. In the original bigger image you can see a hill in the forground that justifies that the horizon is straight. It is still straight in the smaller images, but because that hill is not easy to see, it looks crooked. If the smaller images were rotated, the houses would not be level. So, if you think of it, looking through beveled glass or ice, you would get an off kiltered feeling sometimes too. Makes it more realistic.

Posted by Photography by Joyce Marie Martin at 9:52 AM No comments:

Reaching out of My World.... 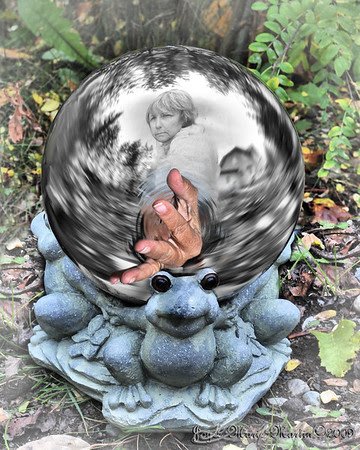 Here we are again with a composition of layering three images and using selected parts of each. I started with an image of a garden reflection globe. Making sure of placing it in a spot that got the best background reflection that I wanted. Next to some bushes on the ground for the "framed" look...

Using this image as my main background, I removed the unwanted features (ie...the garden boarder) by using the cloning brush in psp2X. That is the only program I have available at the moment as I am on a barrowed computer till mine is fixed. Using the round selection tool...I selected the ball area (after making a copy of this original) and ran a b/w photo filter on it. Next I did a blur filter with a rotation with the center having being fix. Then select none. Then making a new image of this background that I copied before these two filters were ran I used the clone tool and selected the colored part of the frog head in front that was changed during the round selection tool b/w process and I cloned the color back onto the original background.
The next image was to snap a picture of myself, not easy when holding a D300 at arms length and squeezing the shutter with the thumb of that hand holding the camera. Yes a tripod could have been used...but then the arm would not have been easy to justify for the purpose intended.

Making a transparent layer over the background I cloned my image onto the transparent layer and then selected it using the move tool and resized and turned it to fit into place. I then made that layer into a b/w and added noise. I cleaned up the edges of the image and warped the head and shoulders some to make it look spherical.

Finally on the third image was shot a straight forward shot indoors with a flash. Nothing fancy...but it works. Again I made a third trasparent layer on the original and cloned the hand onto the image. Then using the move tool, I resized and then rotated the hand to the current position. I ran a clarifying filter to define it more and then copied that layer and pasted it on top of the original. I then ran a swirl filter to distort the the hand layer that was between the layer 2 and 4, then faded the layer some to blend in somewhat to look like the surface of the reflection ball has been disturbed.

After a few more touches here and there and an added mask layer to soften the busy background, I merged all layers and saved as a flattened image. This keeps the original picture's exif info in tact.
Posted by Photography by Joyce Marie Martin at 5:12 PM No comments: 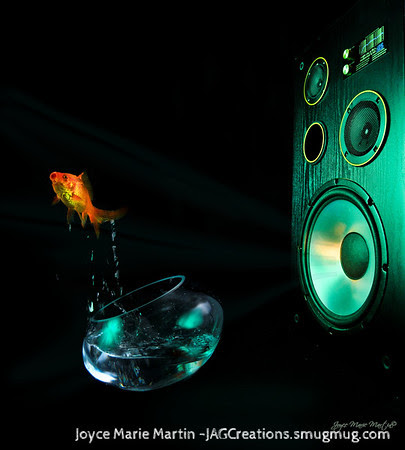 The following pictures were used to create the fish and speaker composition. All shot in the studio using two side hotlights, the one on the left had a green filter, and no flash strobe.

Then shot a fish bowl half filled with water on a black background fabric with a block wedge under it to prop the fish bowl at an angle. I poured water from a jar into the bowl.

Next comes the fish in the jar to magnify its size...

Using the speaker image I made a tansparent layer and added a stripe mask layer. Then faded it to and removed unwanted lines. Used the smudge tool to soften and blend.

Next I copied and pasted the bowl and water image on top as a new layer. I removed unwanted background and adjusted contrast to match background layer. Using the clone tool, I cloned the fish image above the bowl and a few extra water drops. Moved the layer to be in a position in front of the lower speaker woofer. Used the smudge tool to blend in the highlights on the bowl.

Merged all. Another composition image done the same way only with a different view of the speaker and an additional blurring of the bottom subwoofer.... 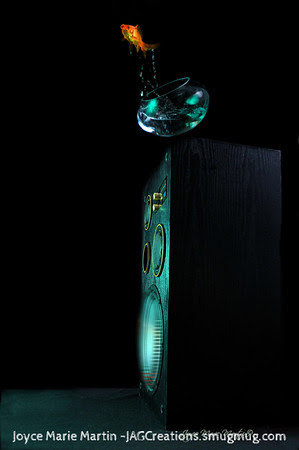 Posted by Photography by Joyce Marie Martin at 10:44 PM 1 comment:

Labels: compositions, how to, photography 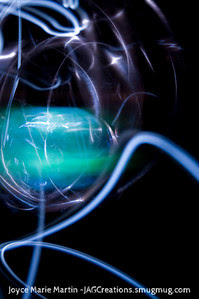 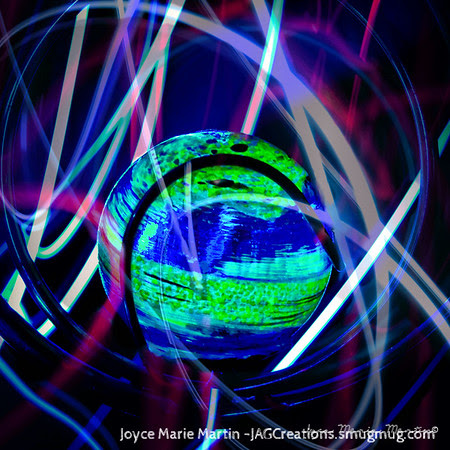 This image was very simple and fun to do. First a glow in the dark orb (in this case an ordament for the garden) was the perfect subject. Suspending a pole that has a hole at each end, to 2 unused lightstands, I hung the orb. Then I charged the orb. I also used a penlight that had two colors.

With the camera on a tripod and the use of remote release, I held the shutter open while moving the penlight in random movements around the orb. Changing the color of the pen as I went.

Another variation with the orb spinning and Shutter held open for 20 seconds this time.
Posted by Photography by Joyce Marie Martin at 5:28 PM No comments: 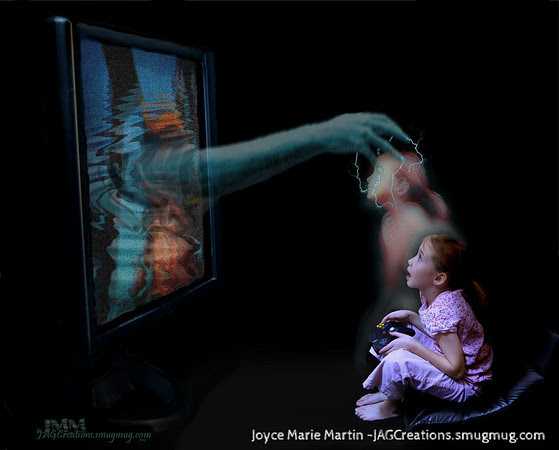 This image was created as a composit of at least 5 images. You can find the progressions as well as the different pictures that were taken at this LINK.
Posted by Photography by Joyce Marie Martin at 11:06 AM No comments:

PARADOX: A Pair Of Pants 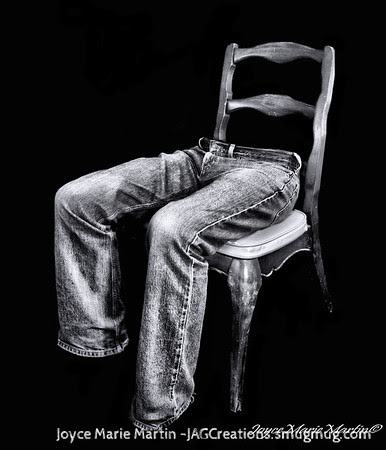 There is tons of room for the imagination with this one. How to make the pants filled out is the easy part! In this set up my model was wearing a black turtleneck shirt and black socks with the blue denim stonewashed jeans. By using a black background and an old chair, an illusion of a pair of pants with not body is simple.

The lighting was simple. Two hotlights with umbrellas, one to the left of the subject and one to the right. A SB800 to the imediate left of the camera with a white umbrella for diffusion. First a picture of the chair alone was obtained for layering purposes. Then the model sits with his arms up over his head. It is important that you keep the focal length and chair in the exact same position for both shots.

The Nikon D300 was set on monochrome b/w and the iso 200. The SS was 1/125, F/10.0, FL 22mm. In pp the contrast up was bumped a tad and a clarifying filter was added. Also a black vinette was added to the model image. The contrast and clarifying filter were run on both images. Next the pant layer was copied and pasted on top of the chair layer. Using the eraser tool, in psp or a masking layer in ps, remove the unwanted body parts to reveal the chair in those parts. Be sure to erase completely to the edges that are not going to be removed. Merge the layers when done. Because its sometimes hard to see the differents between black pixel shades on some monitors...you might need to make a copy of the image and paste it as a new image...then on that new image LOWER the contrast to the point of seeing shaded whites. If there is a difference in your background pixels they will show up as a 'halo' around our image.

Using the paint brush with black....paint over these areas on your ORIGINAL image using the copy for reference only. You can do the copy and paste as new image again when you think you have it all to be sure. The reason it is done this way is because some editing programs will not copy your exif info when you copy and paste as new layer. It is important to keep that info with the image. You can delete the copied image when you don't need it anymore. Save the original under a new file name and you will still have the original originals of the jeans and of the chair while keeping your exif info.
Next, if you would like to accentuate your highlights on the folds of the jeans...then use the dodge brush on the highlights and burn brush on the shadows of the folds in the fabric. Do this to your tastes. 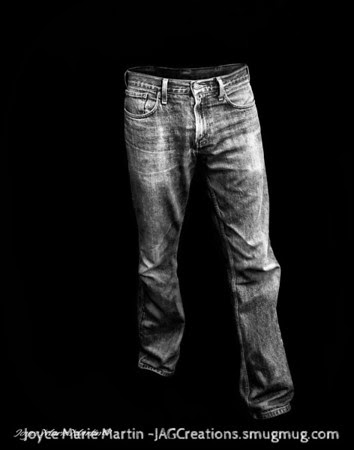 Posted by Photography by Joyce Marie Martin at 9:38 AM No comments: 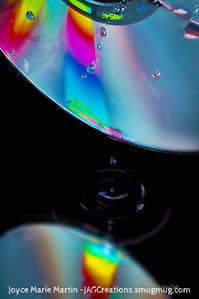 Set up was a cd, mirror, water on the mirror, a bowl of water, black background, one hotlight to the left of camera and an off camera SB800 to the left. The hotlight was mainly so I could focus on the cd, which I hand held over the mirror with water. I set the SB flash unit close (about 18 inches) from the cd. After focusing in manual, I dipped the cd in the bowl of water then held it in the focal range over the mirror and snapped away. The flash has a cool rainbow effect on the cd. I slightly tilt the cd to pick up as much of the spectrum as I can get. The drips are obtained by dipping the cd into the bowl every few frame.
In post editing, the drip falling was lightened and then colorized using a change target color brush and the reflection in the mirror was soften for more reflective look.
Posted by Photography by Joyce Marie Martin at 9:59 AM No comments:

Photography by Joyce Marie Martin
Located in Alaska, but reach out to the world! Find me at http://jagcreations.smugmug.com Check out our facebook pages at http://www.facebook.com/pages/JAG-Creations

Promote Your Page Too